The "War of the Worlds" movie review sample 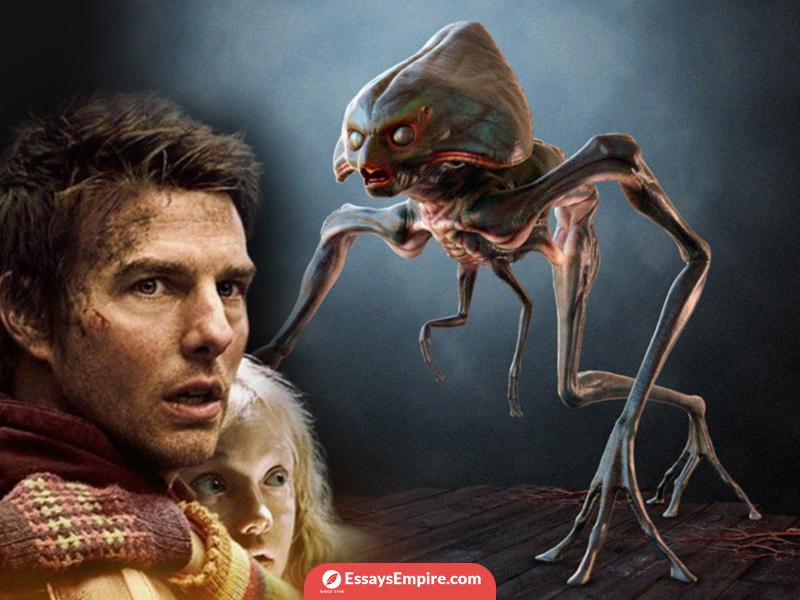 Writing a movie review may seem entertaining, but students can face the problem of plot explanation inefficiency. Have a look at our movie review sample in order to comprehend the consistency of the storyline elucidation.

War of the Worlds

The majority of good movies come from well-written books, predominantly classics. Booklovers know that “The War of the Worlds” is originally a science fiction novel written by Herbert Wells. However, we’d like to briefly discuss its screen adaptation by Steven Spielberg.

While the screenwriters maintained Wells’s core idea and used his portrayal of the Martian invasion, including such elements as fighting-machines or Tripods armed with horrendous extraterrestrial weapons, the film setting cardinally differs from the original one. The events in the novel take place in England of the late Victorian era, but the events in the film occur in the United States in the contemporary era.

The main protagonist in the film is Ray Ferrier. He is a divorced crane operator longshoreman who works in a dock in Bayonne, NJ (Spielberg, Kennedy & Wilson, 2005). Ray is experiencing marital issues, and this has affected his fatherly responsibilities, including difficulties in raising his children. In one of the scenes, his ex-wife appears at Ray’s place to leave the children with their father for a couple of days. Indeed, no one had expected that these days would become unexaggeratedly earthshaking and life-changing for the entire human civilization.

The invasion of the aliens is preceded by various unfortunate events. For example, weird weather conditions and atypical lightning without thunder affect not only electricity but also disrupt the usual life pace of the town. Surprisingly, the occurrence of the lightning signifies the invasion by aliens, particularly to such world cities as New York, Washington D.C., Paris, and London (Spielberg, Kennedy & Wilson, 2005).

The intentions of the invaders aren’t peaceful right from the start. The awkward creatures resembling octopuses decide to destroy human beings with the help of their deadly tripods, and modify Earth unrecognizably. After witnessing them in the streets and miraculously surviving, Ray tries to escape with his children. That’s when a survival game, resembling your worst nightmare, begins.

Eventually, Ray’s son decides to join forces in fighting the aliens. Ray finds himself between two fires again: trying to safeguard the daughter and advising the son against joining the U.S. Marines. Robbie decides to leave to join the battle, while Ray escapes with Rachel, hiding in the farmhouse basement provided by Harlan Ogilvy. They remain safe only for a few days, even when aliens examine their shelter. Subsequently, they discover one more shocking fact: the Martians grow a bizarre red plant, which is spreading dartingly across the earthly landscapes. The aliens intend to turn Earth into the Mars-like territory. Harlan becomes mentally unstable after seeing a giant Tripod spilling human blood and flesh with the aim to enrich the red weed. The bone-chilling scene makes Ogilvy scream rampantly, so Ray unwillingly decides to kill him because he may reveal their presence to the aliens (Spielberg, Kennedy & Wilson, 2005). Unfortunately, their shelter is unraveled anyway when the Martians explore the place for the second time. When one of the fighting-machines abducts Rachel, Ray also surrenders after taking a belt of grenades with him.

Luckily, Ferrier cooperates with other captives, demolishing the Tripod and setting everyone else free. After that, Ray and his daughter head to Boston, which doesn’t remind of the city it was before. Though the red weed is all around, it begins withering, and Tripods stop functioning. Final revelations are that the aliens were unable to survive because of the bacteria on earth.

According to the main idea of this sci-fi creation, war does not solve any conflict. In the setting of the film, aliens threaten the existence of human beings through the invasion of their cities (Spielberg, Kennedy & Wilson, 2005). Under normal circumstances, aliens are creatures that do not understand the ordinary life of human beings. They pose a threat to the entire humanity. Consequently, this turns them into adversaries. Downing (2007), in reference to the film, states that the depiction of dissonant worlds describes the existing conflicts in modern societies. For example, most areas that have conflicts experience calamities such as drought and disease outbreak (Downing, 2007). Apparently, the major theme in the movie signifies the relevance of non-violence in handling certain situations. “War of the Worlds” alludes that our conduct and afflictions we experience are interrelated. The bacteria punished the aliens because they invaded the planet that is not their natural home. It can also teach humans that any invasion, any war in a foreign territory, doesn’t do any good.